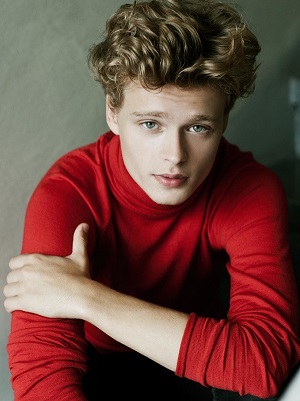 Louis is kind, inquisitive, vastly optimistic, laid-back and thoughtful. He's someone who likes to see the best in everyone, no matter who they are or where they come from. He does not judge people based on their family, or their merits, or their looks. He has refined tastes and a good nature. He always looks clean, presentable, and talks in a sort of dreamy, lyrical and relaxing sort of way. Sometimes he can be 'absent' for ages with his head in the clouds, but is always brought back to earth with a smile on his face.

He loves to tease his friends in a way that would make them smile, and always seems quite cheerful; although not in a bouncing off the walls kind of way. I can imagine Louis has lots of friends and is quite popular, although its not something he really pays much attention to. He is quite the peacemaker and never leaves disputes or arguments unsolved: for him there are two sides to every story, and he likes to try to understand both.

Louis is romantically driven, and is well-known for being touchy-feely with girls he has just met. Others could argue that he hasn't normal consideration for personal space, and often prefers the feeling of closeness with people. One of the most pleasurable things for him is seeing girls blush; although he very rarely lets onto this. He is more a sweep-off-the-feet kind of guy on the outside, but harbours a great lot of restraint when it comes to romantic interests. He likes to be cheeky, and often plays innocent.

Affectionate, kind and softly spoken; Louis seems like the ideal sort of person. But he's certainly not the perfect Adonis that he projects. Sometimes Louis can overlook emotions of others, and can seem like he isn't listening properly to them. Sometimes his friends can feel second place to others, because he looks at everyone in a similar way. He isn't very good at prioritising and figuring out what really matters to him. In the end, he needs to come back down to earth sometimes.

Louis is the youngest of three children and only son to Bill and Fleur Weasley. He and his two sisters, Victoire and Dominique, grew up in Timworth on the Cornish coast; in a cottage embedded with sea shells. They called it 'Shell Cottage'. Although his Mother constantly compared Cornwall to the beautiful southern coast of France; it seemed even her tastes were satisfied, and she agreed it was a wonderful place to enjoy carefree childhood days.

One of Louis's earliest memories is collecting shells on a private beach, which was a short walk away from their home. He often gets nostalgic when standing in a strong, whippy breeze and cawing gulls; as many of his childhood days consisted of such. Sometimes his older sisters and cousins teased him for being a bit of a 'Mummy's boy', and although his relationship with his Father was close; his affection always swayed more towards the female members of his family.

He remembered a time at Nanna Molly's, when Uncle Ron used the putter-outer on all the lights in The Burrow. Louis had slid his hand over his grandmother's and said: "Don't worry, Nanna. Don't worry."

During his Hogwarts years, Louis was known for his friendly and easy-going nature, and was generally well-liked. Although he never quite reached the 'popular' end of the spectrum, it was never something that concerned him. His worries were very few and far between, and he preferred to be more focused on the things that really interested him. More likely due to his unwavering patience and clear-headedness; Louis excelled at Potions and Herbology more than any other subject.

He already has an internship lined up at St Mungo's when he leaves Hogwarts, feeling (throughout his school days) driven to choosing this for his career. He has a simplistic, patient and caring nature to him: what patients of St Mungo's would probably expect in their healers.