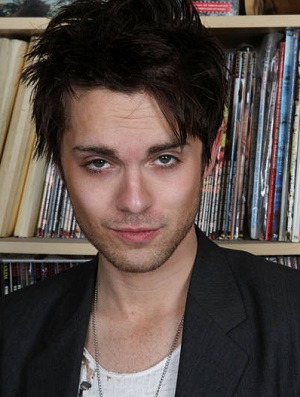 If there ever was a human personification for addiction: Deimos is pretty much it. He is hedonistic, greedy, gluttonous and will try to have every woman falling at his feet: a dirty lech and unapologetic to boot. Seeing as his biggest ambition in life is to follow in the footsteps of his father and be completely surrounded by women; you can't really expect much less than that. He is all about living life to its fullest, having his gringott's vault bursting at the hinges and living by the philsophy of 'whoever dies with the most shit, wins'.

Deimos is usually quite the joker; he enjoys mocking people, playing around with them; teasing them. He loves to fool around and live the party lifestyle, as well as all the crash and burn that comes with it. Speaking of crash and burn though: if he hasn't had a good fix in a while, whether that be drugs or alcohol or a naked bed-warmer; he can be quite short and extremely impatient. There's no telling what he would do to try and get ahold of drugs, or cash for drugs. He's stolen money from his siblings before now. In any case, Deimos isn't trustworthy. He uses and drops girls like cigarettes and will never settle for just one. His hunger is insatiable, and impossible to curb.

~women~
It was hard to look left and not see a pair of tits when I was growing up. My old man became my idol from a young age. He didn't have a conventional view when it came to partnership, and felt monogamy was beneath him. I couldn't agree more. Why have one of these sluts, if you can have a dozen or more? And they all liked me, as a kid, growing up. So much so that I didn't give a fuck who my actual Mum was - I had at least twenty women to dote on me. They all thought I was cute - my eyes were killers back then. Blue, with these stilts for lashes.

So I liked women. I liked their tits. I liked it when they wore those gowns made of like see-through net and pranced about in heels that puckered their tooshes. I could cry and they'd hold me between their goodies. And boy - did I cry. I cried for more, if anything. I was hardly ever satisfied, even if I was the kid who seemed to have everything. It was because I had everything that I cried, and acted out, and wanted those twenty-somethings lecturing me. Just so I could see their tits move when they were angry...

~food~
I fucking love food. Okay, so at one point when I was about ten or eleven, I got a little tubby (okay, more than that).

But I just got given whatever I wanted. I don't think I ever really heard the word 'no' until I started school (Hogwarts, that is). At home, I could just order my stink of a brother, Chaos, to get me more chocolate cake (that's my favourite). It was Hogwarts where, for the first time in my life, I got told that my extra weight was a problem. I'm gonna be honest with ya - if I hadn't had these little shits teasing me for my rolls, I would've happily carried on being a lard-arse. It wasn't until I was about fifteen that I managed to shake it off, 'cause I found something that I liked better.

~drugs~
Having that first smoke when I was in sixth-year changed everything. I remember being in the Slytherin quidditch team's changing rooms (I wasn't supposed to be there - and fuck no, I'm not a player) and I'd just put the finishing touches on a bare-arsed devil painting in the Gryffindor changing rooms. He farted stink bombs every five minutes - no joke. Anyway, I got offered a rolled cone of tobacco and something else, and the kid told me to take a drag.

Not gonna lie, when I was out of Hogwarts I spent a lot of my time partying and not getting a job. I'd left the school with shitty grades anyway, and everyone knew that I wouldn't amount to much academically. Not that it mattered. I'm privileged. I'm cared for. I got money to squander. And heck, did I squander it. Most of it went on drugs, and a lot of nights I spent in the gutters of knockturn seeing my five-course dinners in chunks in the drains. Sorry to be graphic. Just joking - I'm not.

Anyway, I fuck-ing lived. I'll always be hungry for more, and I'll never be satisfied. That's the cold, naked truth to Deimos Lestrange.

~dealing~
I got into dealing because I emptied the entire contents of my vault by twenty-one. No joke.

It's so fucking easy to get a hold of stuff when you've got the Lestrange name to ya. I sell it all - stuff that's not yet Ministry-approved, exotic creatures considered a threat to our ecosystem; I even sold this vampire a real human heart before. Everything and anything has a price on it. You just need to find a sucker that will buy it - and believe me, there are suckers. Money came in, I carry on doing what I want to do, and life couldn't be greater.

I could do with a new pair of tits on the scene though...