Jenna is often described as being very intelligent and is considered to be the best in her year due to how smart the girl is. But she is often one to keep to herself and likes to isolate the world around her, and tends to find people who are overjoy-able to be annoying. And when it comes to Jenna finding some joy, Jenna is often found reading books and likes to keep her face locked in a book. And ever since her older brother graduated from Hogwarts, Jenna has been lonely and depressed due to the fact that she is very close to her older brother and doesn't really get on with her older sister. Therefore she tends to shut the world out around her and doesn't have much of a regard for people trying to weasel there way into her life.

And is very antisocial and doesn't find much joy in talking to people. To those that she does to talk to the girl is very sarcastic, and loves to have sarcasm in everything she does. Which is what makes people not too fond of her, because she's generally always miserable. This helps Jenna, because she doesn't believe in making friends and would much rather just have her brother and books to keep her company, because she believes that people just make life miserable.

Jenna grew up as the youngest out of the three children born to Rodger and Katherine Bishop. All of the kids got equal attention but when she was younger Jenna got most of the attention. Once she got older the girl spent much of her time in her parents' study reading books on magic in hopes of being like them. Which was proven to her when the girl showed her first signs of magic at the age of four. Which impressed her parents, but was expected. The next couple years would be spent with the girl reading books that were of the old wizards and some old muggle scholars. Her older sister would often make fun of the girl for reading those books due to her not being one who got into books and all those things.

When she turned eleven, Jenna received her Hogwarts letter. The girl had been elated, and once she got to Hogwarts. It had been something that seemed to be like how she thought it would be. Classes came easy for Jenna who got stellar grades and it seemed like things had been going just has the girl had expected them to go. Her older sister was in her second year and her brother had been in his fourth year. The girl's older brother was the only person who would help her and try to make the experience the best he could for her.

Once he graduated in her fourth year, it left Jenna sad. Which would be the time that the girl would go down the path, she often frowned upon which was being depressed. Spending much of her time alone, which she still did before. Although once she got to Hogwarts she spent time with her brother's friends. It led to Jenna to spend much of her fifth year isolating herself from most of the student body, only coming in appearance for classes. It was up until halfway through the year, the girl over her Christmas break had managed to cut herself, starting with little until she got bigger ones. Her older sister had managed to tell her parents about it and once the school year let out, they began to send her to a psychiatrist. Something she would resent them for, despite it helping her a bit and when she got back to Hogwarts, her older brother who had been traveling managed to contact her.

She had received an owl from who from her brother who had been very disappointed in the fact that she had been cutting herself. Although this didn't phase Jenna, and she didn't heave her brother's advice because she didn't really care for herself. And she's doing her best to ignore those aroun her because she doesn't feel like they understand her. Even if her depression is something that has begun to bother her parents and how they hope that she won't commit suicide or something. Which Jenna hasn't gotten to just yet and doesn't intend too anytime soon. Although she still feels disconnected from the world and is trying her best to avoid people. . 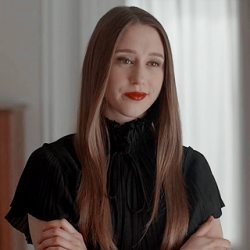