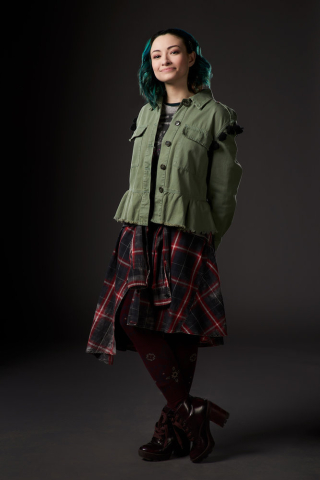 For Kenzi, information is king. The more you know, the more you can do. Any knowledge can be useful. Now, Kenzi tends to use that knowledge for less than legal actions, but that doesn't both her. She's also willing to share most of her information, for a price of course. Morality isn't something that really held to Knezi as she has grown up. She also, views no knowledge inherently off limits, despite what society has thought to say, throwing herself head long in a secret study of dark magic. That being said, she has no love for the Death Eaters in their ilk, and is willing to do anything she can without getting in trouble. Kenzie is also an absolute mess when talking to cute girls.

Being the daughter of adventures who didn’t necessarily follow the rules, Kenzie didn’t have any stability in her life outside of her family. That being said, what her family taught her throughout her life has served her well as time has gone on. Rather than the traditional lessons that most muggles got taught at a young age, Kenzie rather was brought on her parents constant adventures and gained a level of street smarts instead. The biggest thing that differentiated her from her peers was that violence wasn’t a taboo of society, rather a necessary evil when dealing with the underworld. On the other hand though, she learned that you cannot use violence to solve all of your problem, sometimes talking and manipulating that way leads to better result.
Finding out about magic was a bit of a shock to Kenzie, but as she immersed herself in the world of magic, she found so many new tools to use at her disposal, especially in the dark arts. While never a fan of the dark lords that have become associated with the craft, Kenzie scoffs at the notion that just because they were used by horrible people means that they shouldn’t be used at all. They are amazingly useful tools, why should they be left to rot just because they got used by bad people. She has since dived into every branch of magic she can get her hands on, weather what she did was of dubious legality or not. Every bit of information leads to new possibilities and new solutions to any problem. In her mind information is the most important part of a fight, and so Kenzie gobbles up every bit of information that she can, weather it’s gossip or spells.