You are My Darkness (Stella)

alias
Alias
age
Age
sexual orientation
sexual orientation
blood purity
blood purity
occupation
occupation
nickname
Nickname
posts
Posts
points
Points
galleons
galleons
Adult
Permalink
Hades walked into the forest as he wanted to be alone. The school seemed to suffocate him lately he felt like he could not let his true self show. A side that he wanted no one to know about his dark side. Closing his eyes he breathed in the air of the forest before he walked in deeper finally he could be at home finally he found a place at Hogwarts where he could let his dark soul out. He looked at a tree before casting a spell to make it shrivel up and die. He was not in the mood to see life why should he? He wanted to possibly be a dark lord when he grew up and make people fear him. To do that he had to start today.

He was deep breath he had to show Hogwarts his fury it was time to take the school by storm. No one was going to stand in his path at least not any more. He was done hiding his true self he was done keeping to the shadows. He was lost in his own thoughts and did not hear someone approach him.

alias
Alias
age
Age
sexual orientation
sexual orientation
blood purity
blood purity
occupation
occupation
nickname
Nickname
posts
Posts
points
Points
galleons
galleons
Slytherin Seventh Year
Permalink
Stella didn't enjoy going places that would require any sort of work or physical activity. But tonight the girl had decided that she would take a walk and enjoy herself. Most of her house had bored her because all they did was sit around the fire or whatever it was called in the common room and did their own thing. The Slytherin was walking along the path, and she had been glancing around at the dark trees that had made her smirk. In the distances, she could have sworn she heard something such as a spell hitting something, which made her raise an eyebrow.

Getting closer, she could see a figure, which caused her to squint. Walking closer, Stella let out a smirk as she saw it had been Hades who had been one of the few people in the house, she enjoyed. She had crossed her arms as she got closer to him and wasn't sure if he could sense her behind him. Letting out a smirk. "Tired of being tied down already?"

credit goes to deea @Shadowplay for the set! 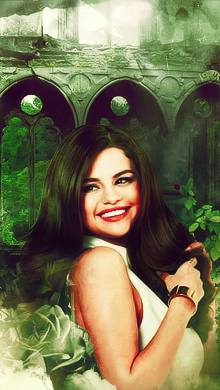