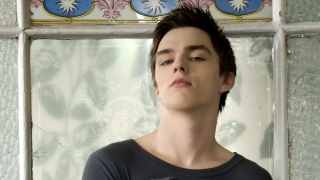 Rafe is vain and arrogant and knows it. He's an impeccable liar and performer for the most part having to learn to behave like other children his age by observing them and how they acted/reacted. While he has a sense of self-preservation, he still does impulsive things because, 'It was fun.' He's also rather different in how he remembers things with no sense of right or wrong. He likes to cause chaos and get under people's skins. While he loves playing mind games with people, he dislikes it when people try to pull the same stunt on him. Dislikes when people have to go and ruin his fun as well as loathes when told there is something wrong with him. He's ambidextrous and has always been independent. Insomnia combined with his flash temper has gotten the better of him.

Mother's Name: Eirlys Krupnik
Age: 46
Blood Status/Species: Muggle/Human
Occupation: Resident of home for unwell
Status: Living (if you could call it that)

Rafe never considered himself strange. Everyone else were the strange ones. People are playthings to him. They are there for his amusement. When his family realized that he was missing a conscious, they reacted in different ways. His elder brother disappeared and his younger brother became paranoid. His mother had wanted to commit him, but within a week had the therapists believing his mother was the crazy one. After that his mother wanted to write him off and give him up but the letter came that announced he was stranger than anyone had thought.

When he knew that he could do magic Rafe would practice all the time. He would do exactly what he'd done to produce the magic until he learned how to trigger it and control it. He would even use it to 'play' with his brothers. Of course he didn't let on to his mother that he was able to do these things. It was rather fun to keep it to himself. Then the letter came, and Rafe found out that he wasn't the only one out there that was different. Wanting to meet others like him, he went to the school only to find out that even if he had magic in common with them, he still was very unique which he wouldn't have any other way.

Doesn't know who his father was since his mother was sort of dating if you called it that, two men at the same time. There were two possibles but his mother won't tell him who they were. His mother Eirlys is a single mother that works many jobs to keep the roof over their head, food on the table, and clothes on their backs. Both of his brother's have different fathers yet none of the fathers stuck around. His mother had been raised a Catholic but had questioned their teachings at the age of 14. She worked many jobs and continually moved around a lot. When she had her first son Alexis she had been happy for a time, but both she and her husband were young. They started to argue and not communicate and finally divorced. It wasn't until years later and looking back she would have realized that her husband had depression.

Appealing to her parents for help until she should bet back on her feet again, even moving to a new city, her parents denied her. It was on some estate flats that she was sharing with a co-worker that she ended up dating the two men that could have been Raphael's father. Both men once they learned of her condition fled and denied that they were the father. Then she'd met Milo's father and got married to him. They were happy or so she had thought until he started to complain about Raphael and commenting about his strangeness. They separated and then when it was confirmed that her middle son had no conscious after he'd shoved Milo into a window and breaking it. The only thing that kept the younger boy from being cut and going through the window was the thick curtains.

Thinking a change of scenery would help, and because it was quite obvious that Rafe's current school was going to kick him out, Eirlys moved the family from Manchester to Merseyside. She had almost decided to move the family to Russia. Why she decided upon moving all the way over there, no one knew. It might have been because she had distant relatives or hoped that the different climate would help her son if it could. Instead because of financial reasons they just ended up moving from Manchester where Rafe was very infamous. When they moved, Rafe just learned to be more careful and make sure that his deeds didn't get back to his mother or any authority figure. After Rafe got his letter and a representative of the school arrived, the whole family felt relief that he would be gone for nine months out of the year. Yet even so, Milo petitioned his mother to send him to the relatives in Russia so that there would be an even greater distance between himself and his brother.