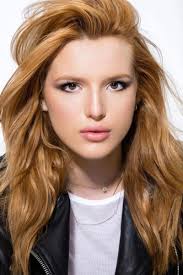 Scarlett is extremely loyal and brave. She is a determined young girl that will stop at nothing to get what she wants. However, she also tends to act before thinking and can be extremely manipulative in order to reach her goals and get what she wants. She loves modeling and hopes to do it professionally one day. She is not known for rule following and loves to prank people

Scarlett had a normal childhood growing up in the upper class side of Wizarding London. When she was 7, she did her first photoshoot for a childrens wizard clothing store and she fell in love with the profession. She begged her parents to let her keep doing it, so they did. She did at least 4 or 5 shoots a month which also helped pay bills around the house.

Scarlett has always been spoiled growing up since she was the first daughter in a wealthy family. She was given everything she wanted the moment she asked for it. She grew up knowing about magic so when her letter arrived on her 11th birthday it was no surprise. She grew up spending most of her time with her family or on a photoshoot set. When she was 11, she got her acceptance letter from Hogwarts and she was rather excited to attend the school

While at Hogwarts, she didnt get to model as much, but she still enjoyed her time there. She made a few friends and even did quite well at her classes. She wasnt the best, but she was far from the worst. One thing she never enjoyed, however, was flying. She would watch the quidditch matches, but she could never really get on a broom herself.

As she grew older, her passion for being a model and being in front of a camera never faded. She still has the same dream she had when she was 7 years old and first stepped in front of the bright flashing lights. To be a professional model.

The Fyre family are a well known wizard family of emmense wealth. There wealth came from Andrew Fyres innheritance and his vast knowledge of investments and stocks. They live in the upper class part of London in Fyre Manor.
.