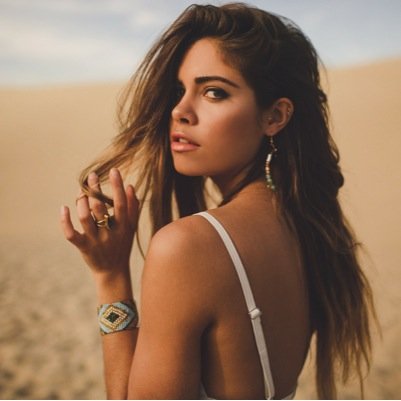 Name: Mayari Achlys Adair
Nicknames: May, Maybug, Mayflower, Angel (all from father)
Titles:
Date of Birth: 14th Febuary
Age: 17
Blood Status: Pureblood
Hometown: Oklahoma
Current Home: Illvermorny, Oklahoma
Nationality: American
School: Illvermorny
Sexual Orientation: Heterosexual
Wand: 10", Sequioa, Griffin Claw and Manticore Hair, Solid. In normal light, it's dark and almost black but the moment the evening sun shines upon it, it looks like greens and blues are mixed into the inky darkness that is the wood of the wand.

Hair Color: Light brown
Hair Style: Wavy, messy
Eye Color: Hazel, more green.
Body Type: Slim
Height: 5'6
Other Distinguishing Features: Tribal marking on her wrists, to always remind her of home.
Clothing Style: Very Bohemian style clothing, always has crystals on her person and flowers in her hair. She's bare footed most of the time and has bracelets on her ankles. She likes breezy and comfortable outfits. Something that allows her to be close to earth and home.

Mayari is a whimsical character, quite dreamy and in her head but when she focuses on something, she is sharp and clear headed. She is caring and nurturing over animals and plants, her family also but other people, she doesn't really trust people due to being shy. She loves to be connected to her roots but she's definitely more modern than the older generations of her family but no matter what, she'll always go back to the ancient ways. Mayari loves singing but is too shy to sing in public, only ever humming or mouthing to the words in public.

Mayari was born at the end of winter and on the day of love. Her parents held her so lovingly and cared for her so deeply in her first months, never letting her out of her sight. She was their little miracle as Nina had been informed that she was unable to have children but Mayari appeared and they were truly blessed. Not just because of having a daughter, but because she was a powerful one. At a young age it was made clear of her affinity towards Earth from the way one morning, her bed had been surrounded by plants in order to protect her from the burglar that had attempted to get in and had been pinned to the wall with vines. Earth desired to protect her.

Throughout of childhood, she had lessons from her grandparents in order to control these powers but then, they realised she could only really communicate with the Earth and that she must've cried out in the night in order to get the protection she needed. In those lessons she learned all about her ancestry and learned about the spirits, which is when she discovered she had Abacomancy, divination with dirt and sand. She fell in love with the idea and began working more with fire, herbs and of course, a twist of magic. She became her family's little witch doctor, knowing the ways to cure people due to her ability to communicate with the plants.

Finally, she turned 11 and received her letter to attend Illvermorny, having always dreamed of going to the school her parents met as she was a true romantic. Whilst preparing to attend, two baby ravens flew into her bedroom window, having gotten caught on her dream catchers and unfortunately, harmed their wings so Mayari's father healed them but they seemed attached to Mayari. This was around the time she was reading about Greek Mythology and had come across Huginn and Muninn, two ravens that worked for Odin and she named them after them. They became her greatest companions and one, if not both, would always sit on her shoulders and in the crook of her neck, hidden behind her hair.

The six years she's spent there were in solitude, not something that was forced on her, but something she desired. She worked on her abilities, speaking to the dead via rune stones and telling someone's fortune through simple dirt on the ground. She's been working on her alchemy, poisons becoming a speciality of hers even if her skills should be used for good. There's no stopping the dark intrigue inside of her. She's always been a curious soul. Now in her last year, she's eager to go out with a bang and make her family proud, or whoever claims her naive little soul.

The Adair Family are an ancient family, having been founded in the mountains and lived there for centuries. Some of the Adair family members are vampires, dating back to the time it was founded and will teach the younger generations all of the old Native American/Cherokee ways. They live by the rules of the Earth. Mayari's family is more of the modern but still ancient type and despite not actually working, will do anything they can with their ancient ways to help the modern magic world. Their alchemical skills are above normal due to their connection with the earth. Mayari being the best they've had. One of Mayari's older family members (ive not added them to the key members thing because I have yet to figure out name and age) is a dark wizard and extremely close to Mayari, them being best friends despite being a few years older and that is why there is the possibility for her to be swayed to the other side..