Appearance
Hair Color: Light Brown
Hair Style: Long, Straight
Eye Color: Green
Body Type: Slim
Height: 167cm (5'6")
Other Distinguishing Features: n/a
Clothing Style: She is someone to wears anything, depends where is going. If its just outing with friends then jeans/skirts, tops and jackets. If it's party then dresses. She loves heels.

My life was quite good as the kid. Nothing to complain about really. Things changed for me when I was five years old girl. My mother died then due potions explosion. I know that since my father told me. After that I had to live with father who had drinking problems and drug problems. She never did hit me or anything but they about when she was trying to hit me my grandma was there. She had came to check on me. When she saw how I lived she took me away from that home that night to hers. I was then eight. A few weeks later my grandma had custody over me.

My life got simply better after that again. I had home what I could call it. I loved my grandma and grandad. They were very supportive. At age of eleven I git letter from Hogwarts and I was very excited. I was sorted into the Ravenclaw house there. My school years were good and fun. I learned so much and made so many new friends for myself. I even got good marks on my all exams. Mostly O's and E's. Only subject where I manged to get A was potions. I was never good there.

Anyways a few days after graduating I was attacked by someone in the ally. The person did bite me even. At first had no clue what happened. I lost even conscious that night. I woke up a day later in some stranger bedroom and was so hungry. I had never felt like this before. When I walked out of the bedroom I realised I was even wearing just my underwear. Noticed there some guy standing. "Hey. Could I get my clothes back?" I asked and she just shook her head. "Their dirty," he had just said. Anyways he still gave me some dress. He was naked but that didn't effect me much since I wasn't into boys only girls. I wasn't someone to hide.

That same night he explained who I am now. He even thought me how to feed people or animals. And how to have control but that guy was a just a friend for me. When I told who I am my grandparents they were scared at first but calmed down a few days later. So I have been a vampire for a bit time now. Since I can go out only nights then I ended up working at this one night club as bartender in the Hogesmade. Where I met very interesting owner, who I'm attracted to. 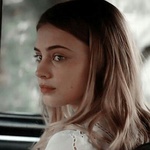 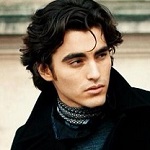