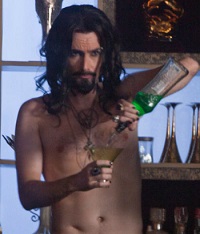 And that's just a thing I like to say every now and then, just to give myself a little pep talk before telling others my story.

Hi, I'm the demon Drogros, but you can call me Nick.

I suppose once, some thousands and thousands of years ago, I was an angel. You know - golden halo, white robes, long wings, that sort of thing. That's usually how humans want to see them, isn't it? Anyway, I don't remember anything about being one. No demon does. The only thing that I know about my time as an angel, however, is that I did something pretty bad to piss off the Almighty. That's usually the way it goes for fallen angels, you see.

The only reason I know this is not through memory, but because they still bloody go on about it down in Hell. It's a bit of a problem in hell, my falling, as much as it is to heaven.

So one day I gather I was down on Earth, being a little beam of hope in the little eyes of the humans, and I decided to give one of my wing feathers to a wizard. This was - ooh - hang on - around 400, 450 B.C.? Something like that? Anyway, I gave it to him, and he made a wand from it. That wand didn't do good things, so now I'm a demon. Isn't that nice?

Fortunately for us lot, that wand is just now a legend or a myth amongst wizard kind... no one actually believes it. Some do. Some tried to get their hands on it, but they all failed. No one will find it - trust me. I know where it is. Keep that bit quiet around Satan, though. Don't want him finding out just yet. It's all about timing, y'know, because we want a lot of things to happen before then.

So I'm one of the earth walkers. That basically means I'm a demon who hangs around earth a lot, and normally that means they don't want me around hell. Sort of a duff job, really. Belphegor is the one I represent when I'm on earth: that's one of the princes down there. They call him Lord of The Opening, but I can't actually tell you why, because I don't know.

Part of my job is to get humans to be, well, lazier. Than they already are, I mean. We take full credit for that, thanks.

Nowadays I mostly work around what wizards call 'muggles', but I like to be around them magical guys as well. Just to stir the pot a bit more. I'm the first demon demon hunter for a century, can you believe that? Such an achievement. I also work at some sketchy club in Knockturn Alley, but that's more like a side gig. Get to see people procrastinating and being idiots, so that always makes me glow. Just can't get enough of it, sometimes.

So we have to talk about my look. It's funny, yeah? Humans always want demons to look this way, don't they? It's just my little gift to you all. Okay, so I am taking the piss a bit. Just a little bit. Pentacles, please. Personally I can't stand 'em.

Oh, I'm done talking so a very Ruthule Romathis to you all! Ha ha ha.