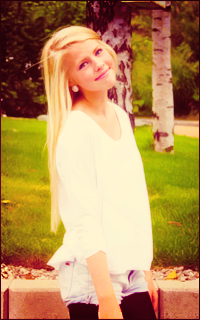 Cassiopeia is someone who tends to be nice towards people most of times but if someone really pisses her off or makes her mad then she will be total bitch for sure. She can't just hold sometimes her emotions in her. She can be quite sarcastic one even. She doesn't let anyone to hurt her or make fun of her, if they do it then they can get so much worse back. She is someone who is good at pretending to be fine even if when she wants to cry very badly. Oh she isn't the very loyal person to be honest she just doesn't trust people around her. Getting her trust is very hard thing to do. Oh she is quite brave one for sure. She also like adventures very much for sure. She is smart girl but doesn't show it often out for sure.

When ever Cass as been young she loved to be outside and go to on adventures a lot. She discovered so many places alone or with friends. She just couldn't never stay still and so she just did it. Over years she became very adventures, she always need to discover something new or just needed to be outside. She wasn't really never the girl who would read something in her room.

When and why she became afraid of heights isn't really sure but one day when she climbed up to big mountain and looked down there she realized she was afraid of heights. So ever since then she doesn't like to climb up somewhere high. Also she tries to avoid roller coasters when ever they go disney land or some other theme park like that. Anyways she slowly tries to come over her height problem. She tries to enjoy her life so good as she can.

When girl became eleven she got letter from Hogwarts. It wasn't nothing new for her really. She knew one day the letter will come since she had shown signs of magic ever since she was five years old girl. She wasn't sure in which house she would be put in but she didn't really care much about her house really.

Awhile being in Hogwarts Cassiopeia learned so much about Magic and she was sure was excited about learning more since it's been only four years there so far. She also have made few friends to herself. Even if getting along with Cass doesn't seem always be very good idea. She can be quite mean one at times

Right it's her fifth year and we will see how it goes now.
.

Mercer family was first time mentioned in the start of 17th century. They always have tried to stay pureblood every since then. They wanted to continue the family line being pure, so there used to be many arrange marriages or so in the past.

Back in day they did think that purebloods were better than anyone else and began to join  the Death Eaters. They were always against muggles and also muggleborns and even hunted them, even if they needed killed. They just found it right thing to do.

Over years they became quite feared ones but it changed before Cassiopeia was born. Her father who agreed with her parents when he was still a child changed his mind when he grow up. Since when he saw that muggleborns can be brave ones like purebloods. He became someone who tolerates now everyone and and also he teaches it to his own kid. He really hopes that his kid won't turn out like his parents were but nowadays seems like at times Cass doesn't listen her father well.