Appearance
Hair Color: Brown
Hair Style: Poe hair is rather short and unkempt, and tends to something he constantly put his hand through.
Eye Color: Light Blue
Body Type: Skinny and Tall
Height: 6.1
Other Distinguishing Features: His Blue Eyes
Clothing Style: He tends to dress rather casual, but is notorious for wearing jeans and plaids. Although his clothing style tends to vary quite a bit.

Leo is a man who is filled with a lot of hate after losing everything to a duel, and is a man who often spends his entire time drinking and screwing people. Having been a former big shot and a man who was meant for bigger and greater things. Although the fall from heaven would end up also be something Leo would end up not being as confident, and is a man with an undying loyalty, but also a man who wants to take down the man who took everything away from him and is known to also have a dark demeanor to him, as he’s a major bookworm, and likes to bore the guests with reading various stories.

A man who often uses his anger as a way of sleeping around, and is notorious for having angry sex just to calm him down. His loyalty though lies with The Order, and is a man who is very much determined to prove his family wrong, and is trying to get his chance back. Although is often deterred by the events of that duel, and is known to spiral into a drinking phase but when he’s not he is charming and quiet, and is often good with getting people as he likes to sleep around with the guests who come into him.

He’s also brave and isn’t known to stand down, minus going to drink afterwards. Although right now he is not as brave as he used to be, and tends to be a man who whines when drunk, and is not exactly liked, and not very trusted by The Order. Even if he has an undying loyalty to the Order and determined to do his job right, and get his life back.

History
Leopold grew up in Saint-Tropez, France to a family of average wealth, and was the son of an auror who expected him to follow in his footsteps. Which had been the plan until that duel would end up ruining his life. It was something in which Leopold would end up being the star son for most of his childhood and it was something that would end up causing a rift between Leopold and his brother which often led to him spending his free time reading books.

When he was eleven years old, he was accepted in Beauxbatons and like everyone else in his family would end up being forced to follow in the DADA footsteps as his family. His early years had been the start of his dueling career, and he would join the makeshift dueling club in which had been at Beauxbatons and it was one of those things where he had been the best there in his mind despite others being far more skilled than him. His classes would also prove to be a thing that he wasn’t very good at due to his lack of care. Although his brains growing up would be used for dueling, it would be in his later years that he’d actually take his other classes seriously by demand of his parents.

In his fourth year, Leo would end up taking his other classes seriously due to his parents threatening him that he needed to take his studies seriously. Up until then the male did not have much care for anything else, but dueling. It was due to him also being in talks to one day in a way become the president of the Dueling Club. This meant he had to have good grades, and so he did but it’s something he tried to keep secret. His appearance throughout most of his years at Beauxbatons was of the big shot dueling kid.

Things changed for him once he hit his final year, and had lost everything such as at his Dueling Apprenticeship that was in store for him at some big dueling club. He had gotten into a huge bet with one of his peers, and got into a huge duel that would end up costing everything after the person had cheated, and sent Leopold to the hospital where he would end up being a coma for a good four months, and was lucky enough that he was able to even graduate. He’d wake up and would learn that he lost everything.

Following his recovery it was safe to say that Leo was no longer the guy he knew, and right after he graduated he’d be disowned from his entire family. He would also end up drinking a lot and it was a thing where he would end up resenting the person who had injured which was a thing in which they had been deserving of big time. His pain from not being able to follow his dreams would be him reading books, and where horror books had come in and Leo would also soon find himself moving to England where he’d get his job as a bartender, and learn that his brother had fallen into their parents footsteps. Also that his entire inheritance would end up taking away from him which would lead him to be drinking is life away.

Now it’s been about four years, and Leo is still living in London where he now works at the Knight Bus Conductor, which is a job that he often takes advantage of by sleeping around with some of the wizards, and his older sister has just recently moved in with him to keep him on track and has also gotten a job as a man who does various duels for The Order, and is in away considering The Order his saving grace, but is still reading his horror books, and is notorious for scaring the wizards on the bus whenever he reads them. As well as getting the name of Poe which is the name that he goes by and is also trying to stir away from the name Leopold or Leo all while his sister is trying to remind him of who he is. Which is something that he really is not into due to him resenting his family, and knows that he ended up making his family mad due to how he lost a duel and ended up a coma, and hopes to one day destroy the man who took it all away from him, even if he knows it's not the way of The Order. 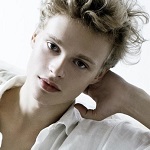