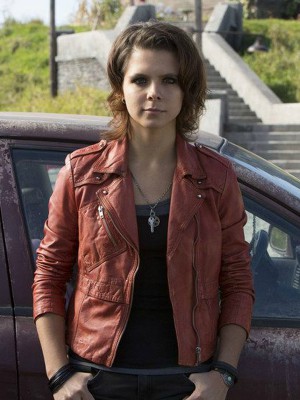 Personality
Jodie is a typical non-conformist, wild one, breaks the boundaries, vulgar and spontaneous. She has seen the detention room more than she's seen the class room, and has received a few letters home in the past couple of years. That being said, she does really care about learning magic. Then she'll learn new and inventive ways to annoy the faculty and their prefects, of course! There are some things she does care about. Seeing injustices being done is something that she struggles not to speak out about; but that could very well be the death of her.

History
Jodie grew up in the countryside of Maine, nearby the town of Manchester. But for such a sheltered place, she had anything but a sheltered life. Her Dad, who should've had 'non-conformist' as his profession title, kept and bred Thestrals. The beasts, although native to Britain and Ireland, had acclimatised well to their weather, and her Dad was very fond of the idea of American wizards using them.

Unfortunately, her Dad could see them. Jodie never found out why, because he never talked about it. He knew that both his parents were dead, and that was the end of the conversation. Her Mom, a no-maj, loved being pregnant so much after her first (Jodie) that she became a surrogate for the muggle women who had little luck. She was a selfless woman, although her constant state of pregnancy formed a bit of a rift between her and her Dad. Jodie wasn't really aware of this, but they ended up divorcing when Jodie was fourteen.

Life growing up on a Thestral 'farm' was never short of entertainment. Whenever her Dad invited some of his friends over with their children, Jodie used to take them into the pen without warning. Then she'd laugh at them being knocked and nuzzled by invisible creatures. Only if she didn't like them, though.

Following the divorce, her Dad wanted to go to move to England; to be amongst other Thestral breeders. Her Mom stayed. Jodie had a choice to stay as well, but she took the move to England: believing it to have some adventure. Some of Jodie's siblings did stay, and some of them followed.

After attending Ilvermorny for the first three years of education, Jodie joined Hogwarts for fourth year and is now in her sixth. Her penchant for 'acting out' may have some connections to her grief following her parents' divorce and several-thousand-mile separation. But, as she says, it would have happened anyway. Where she lives is just boring!