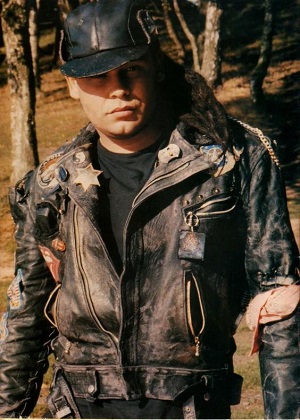 Personality
Fred is both incredibly lazy but undeniably enthusiastic. When it comes to what he actually enjoys, he's a ball of energy. Having as many laughs as possible is what he wants from life, so he doesn't take anything very seriously. He can be incredibly reckless, frustratingly stubborn and hates authority figures. He's very much a 'rebel' at heart, and is very proud of it. Whether that's something to be proud of is a different question, but it's unlikely that he'll grow out of it.

Freddy's prone to boredom, but probably won't do anything about it. He will comfortably be in bed all day and moan about being bored. With women, he's pretty crap. He's not the smooth-talker he wishes he was, and needs to wash up a bit more if he actually wants a date. Still, it's not at the forefront of his priorities. Everyone likes a bit of a attention now and then, though. Women can quite easily string him along like a puppy dog.

History
People of his generation were unlucky. They hadn't witnessed the spectacular in which two ginger kids left the school on their brooms while filling the castle full of fireworks. That was the treat of '96. Fred was very proud that one of those kids was his Dad, and the other was his Uncle; who he was named after. Unfortunately, Fred Weasley the First had died during the second wizarding war but damn: if Freddy could've met that absolute legend...

His family were the best. They didn't take life too seriously, and explosions were very much encouraged. Jokes and pranks were an integral part of his upbringing; which meant he spent a lot of his childhood making his younger sister squeal and stamp in rage. He knew from an early age that he wanted to end up working at the joke shop, but his Mum (more so than his Dad) implored that he finished his schooling first.

It was clear from the get-go that Freddy didn't want to learn a lot of stuff that Hogwarts taught. He kept to what he was interested in, not what the curriculum forced him to do. By the time he was in sixth year and managed to get half-decent OWL grades; Freddy's attendance record was so appalling, the Professors called a meeting with him and his parents to discuss it. They gave him several warnings, a whole lot of detentions, lectures about incompetence, and then finally decided that he could no longer attend the school. Freddy was expelled from Hogwarts, and was damn proud of it at the time.

His speciality was fireworks and always had been. While he worked at the joke shop; he didn't like the idea that it wasn't his. He wanted a firework factory: bigger than the Ministry, but more than he could afford. So, he decided, the most successful wizards start from nothing: from humble beginnings. He took the post as Hogwarts gamekeeper a few years ago in the hope that he could save up enough. But, two years later, and his vault is pretty much the same as it ever was. But, strangely enough, Freddy likes his job. He likes his little hut on the grounds where he was once banished from. It's a pretty easy life, and people leave him alone in his hut while everything goes BANG.