Personality
Kyle is someone who loves people and does his best to be there for those he cares about. And is the type of kid who tends to trust in anyone and is often regarded as being very naive. Even if Kyle does his best to see the best, but also tries to not let himself get walked all over. But he often tends to not get any hints when it comes to dealing with people and how so people tend to find his nice nature to be very annoying, even if Kyle is just trying to make friends.

Although he is someone who tries his best to be there for those that he cares about and is loyal by not leaving your side, when he is around his friends. But he is someone who also is smart and dedicates his life to doing really well in school being the best in his year. But nevertheless he is someone who is very friendly and tends to very naive when it comes to people. Which is one of his worst quality, even if he just wants to see the best in people.

History
Kyle grew up with two muggle parents in Surrey, England and grew up not knowing the existence of magic which was something that Kyle wondered. Having been the youngest out of three kids, Kyle was the baby of the family and often the most spoiled. His older siblings didn't think he would make it far due to how he was attached to their parents. Which was mostly because Kyle felt very comfortable around his parents and had felt safe.

And when Kyle was seven years old, the boys literally had started to have unexpected things happen which would lead him to often get picked on by people. As many people thought of him a freak, and his siblings were worse. But Kyle still tried believe people were good and is the reason for why he holds those that care about him close. But being picked on everyday had been something that had been very stressful for Kyle who thought he was acting normal.

When Kyle was eleven, he learned that he was a wizard. And went off to Hogwarts where he started to feel accepted by those around him. Also where he would make friends and never leave there side but his siblings still felt the need to pick on him, and often told people that he was away at some freak school which has meant that he relies on his friends to be his siblings. And hopes that one day that he can become close with his siblings and they would stop picking on him. 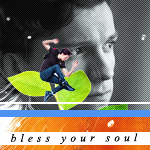